Our Parish name “Magh Ene”  translates to “The Plain of Hospitality”

All the information given below is taken from the research of Fr. Paddy Gallagher in his book……. Where Erne and Drowes meet the Sea.

“He wrote so that others would learn, therefore …….“

The Meaning of Magh Ene

The district between the Drowes, the Erne and the ocean is a well defined, distinct, geographical unit and recognised as such from the earliest times.  From Bundrowes to Belleek Bridge and from Lough Melvin to the mouth of the Erne this area has been known for untold centuries as Magh Ene.  “Magh” is a common Irish word for level country or cleared land.  Today, the first part of the placename is all that survives when we speak locally of the Magh, usually spelled Moy or the Moy Road near Ballyshannon.  But strictly, the Magh includes all the country between the Erne, Drowes and Sea.  The second part of the placename, “Ene or Eine”, is more difficult to interpret.  It may mean ‘hospitality’ and therefore offers a translation of the “Plain of Welcome”, an explanation suitable to it’s present interest in tourism.

Apart from the legendary landing of Partholan on the Edge of Magh Ene, on Inis Saimer, local historians point to many other proofs that many early settlers, from many foreign lands, visited this area as many as four thousand years ago.  Neolithic wares from Inis Saimer, flints from Tullan Strand, “Giants’ Graves” from Bundrowes, Finner and Labbinlee were left behind by the visitors of many years ago.

The last few centuries before the birth of Christ saw many Celts from the Continent invading Ireland.  To protect themselves from these invaders with their new iron weapons, the old Ultaigh (Ulstermen) threw up an earthwork rampart across the old Kingdom of Ulster, the first real Border between North and South. Traces of this great earthen wall can still be seen, especially from the air, stretching from the Drowes, through Ardfarna , by Lough Melvin and across the country to the sea near Newry.  Somehow, in the following centuries, this story was lost and replaced by the story of the Black Pig’s Dyke where a large pig or worm raced across this part of Ireland, throwing up a great wall of earth until it reached this district and was killed by the men of the Magh, in this Valley of the Black Pig  (Dunmuckrim).

The Great Wall of  Ulster was finally pierced and the Celts poured on to Magh Ene and after many a bitter battle wrested from the inhabitants all the area now known as Co. Donegal.  Tradition states that the leaders of this fifth century invasion were the sons of the High King,  Niall of the Nine Hostages, Conall, Eoghan and Enda and that this area became part of the new Celtic Kingdom of Aileach.  It was divided into separate states with Owen taking Inishowen, Enda taking the left  bank of the Finn and Foyle rivers, Conall taking from the Swilly to the Drowes and a fourth brother Cairbre ruling from Drowes West to Balisadare. Magh Ene, therefore, was a “borderland” between Conall and Cairbre,  much of which often changed hands.

When Christianity came to Magh Ene with St. Patrick circa 461 A.D. and St. Ninnidh came down  Lough Erne, from Inishmacsaint, in  the sixth century, historians believe that Cairbre’s descendants still ruled Magh Ene.  The history of the next three or four centuries is rather blurred as attacks by other Irish tribes and invading Vikings often resulted in changes of leadership and authority.

When Patrick first arrived in Magh Ene, he would have found a pastoral and agricultural society, whose economy was based mainly on cattle, tillage and fishing.  The homes of the upper-classes were in tall hill-forts and many of the ruling families, for greater security, built on islands. The ordinary people lived in more humble homes of wattle or stone and unenclosed.  They generally worshipped the elements such as the Sun or Sea-God. Wherever Patrick and his Priests were welcome, they obtained a site from the local Chieftain, for a Mission Church.  The Church would be built of stone and wood while the Priests would build “bee-hive” cells for themselves.  Patrick’s churches were called by the Irish name “Donach” or “Domhnach” coming from the Latin word Dominicum, meaning Church.  There is a local tradition that St. Patrick, on his way to the Moy, cursed the river Duff because the fishermen there refused him fish while he blessed the Drowes because boys fishing there gave him a salmon.  The Saint, probably travelling by chariot and heading for the Ford of Ath Seanadh on the Erne (just east of the present Ballyshannon Bridge) would have followed the track and bridle paths that have all but disappeared today. His journey would have taken over the crest of the hill on the Moy and no doubt stopping to admire the valley view, decided to build a Church there.  This Church was known as the Donach Mor of Magh Ene – the Great Church of the Moy.

Fr. Paddy Gallagher spent many years researching and searching for this very important site. A summary of his work (Clogher Record 1958) indicates that in 1612 King James gave twelve sections of land to a Knight whose name was Folliot. Two of the townlands were named as Donaghmore and Tullybrack, part of presentday Higginstown. The original placenames have disappeared from use but Donaghmore (the Great Church) must indicate the site of a very special Church. There has always been the tradition of a Tobar Phadraig in a hollow, north of Higginstown House, the old residence of the Coan family. Near this well, has been discovered an ancient burial ground and since the early Irish usually buried their dead around their Churches and there is no record or evidence of any other burial or church site in the area, this burial site must be the churchyard of the original Donach Mor of Magh Ene, founded by Patrick himself. Was this the first Christian shrine in today’s Co. Donegal? Patrick usually left a Priest in charge of an area when he left. The only name associated with this Church is that of Dianach, who is listed as an Irish Saint with his Feastday on January 14th.

The Shape of  Things to Come.

After Patrick’s time, the Celtic Church was divided into many territories and ruled by Abbots of Monasteries, only some of whom were Bishops, often protected and controlled by leading families.  St. Ninnidh built a monastery on Inishmacsaint Isle (near Devenish) circa 530A.D. and using the waterways of the time cared for the Faith of the people from the Erne shore as far as the sea, sending his Priests and Monks to the local Churches.  This would have included Donach Mor of Magh Ene.  From that time comes the description of the area as the Parish of Inishmacsaint.  The twelfth century brought the great Church reform movement which introduced the diocesan system, much as we know it today.  Each Kingdom was given a Bishop, to whom everyone was subject.  Magh Ene came under the ecclesiastical control of the Bishop who resided at Clogher in the present Tyrone. The same century saw the area of the Drowes and Duff becoming part of Kilmore Diocese and the Diocese of Elphin reaching as far as the river Duff.  North of the river Erne,  Raphoe Diocese began to take shape.

Churches on the Moy

The Martyrology of Donegal mentions  an early Saint called Eoghanan of Ardleiceach on Magh Ene, near Assaroe, who probably was the Priest associated with the district.  Unfortunately, like Donach Mor, the site of Ardleiceach is lost today. But it is believed that the area referred to is situated in the little piece of Dunmuckrum, south of the old railway which borders Rathmore.  This Church probably fell to Viking attack and is now forgotten. Although the Parish Church was situated on the Isle of Inishmacsaint, records from 1603 indicate that there were two chapels  in Magh Ene,  at Finner and in Ballyhanny ( presently known as Sminver Church).  It was to these centres of worship that Priests from Inishmacsaint came, to care for the spiritual needs of the people.

It is interesting to note that seventeen townlands on the south side of the Erne are part of Raphoe Diocese and the Parish of Kilbarron, even though records from the seventeenth century clearly indicate that the Erne was the border between the Dioceses of Raphoe and Clogher.  What actually happened was, that in the centuries after the foundation (1184) of the Cistercian Abbey of Assaroe, lands were granted, from time to time, to the Abbey.  Seventeen townlands on the south side of the river were in the possession of the Abbey in the mid-sixteenth century.  Due to the disorganisation of the Church here in Penal times and the disappearance of the Cistercians from the Abbey, when the Penal times were over these townlands reverted not to Clogher but to Raphoe because all that succeeding generations could remember was that their clergy had been appointed from the Abbey and not from Inishmacsaint.

After the conquest by the Normans and through the Penal days, Magh Ene continued as part of the Lough Erne Parish of Inishmacsaint.  Only in 1798 and again in 1835 appear records of a  Parish Priest of the Moy.  Around the turn of the eighteenth century, with the growth of population and for administrative purposes, Inishmacsaint was split up between Devenish (Garrison) and the seaside Parish of Inishmacsaint.  In 1955, by episcopal decree, Inishmacsaint reverted to it’s ancient name of Magh Ene, as it was in the time of Patrick.

It’s townlands are as follows (with translation in brackets)  –

Ardfarna – (Height of the Alders),

Ardlaughill – (Height of the Elmwood),

Ballyhanny – (Mouth of the Slope),

Drumacrin – (Ridge of the Tree),

Dunmuckrim – (Fort of the Pig Ridge),

Portnason – (Bank of the Ramparts), 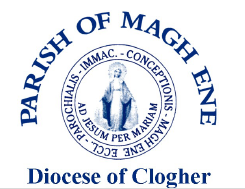 Bible Verse of the Day

Call to me and I will answer you, and will tell you great and hidden things that you have not known.
Jeremiah 33:3

SAVE & ACCEPT
Churches are Open

From Monday 10th May

The easing of Covid-19 restrictions allows Churches to re-open.

A maximum of 50 people are able to attend Mass, Funerals and Wedding Ceremonies.

Those who attend must wear masks, sanitize their hands as they enter the Church and remain distanced from each other unless they are family.

We intend again to arrange with the seating teams the ways in which the interior of the Church will be arranged. Our local difficulty is facilitating both locals and our summer visitors because it is difficult to explain in a public manner the Church arrangements.